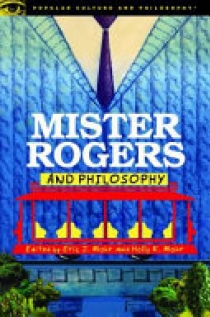 Mister Rogers' Neighborhood, which began as The Children's Corner in 1953 and terminated in 2001, left its mark on America. The show's message of kindness, simplicity, and individual uniqueness made Rogers a beloved personality, while also provoking some criticism because, by arguing that everyone was special without having to do anything to earn it, the show supposedly created an entitled generation. In Mister Rogers and Philosophy, thirty philosophers give their very different takes on the Neighborhood phenomenon. ● Rogers's way of communicating with children has a Socratic dimension, and is compared with other attempts to cultivate philosophy in children. ● Wonder is the origin of philosophy and science, and Mister Rogers always looked for wonder. ● Did Mister Rogers unwittingly create the Millennials by his message that everyone is special? ● What Martin Buber's I-Thou philosophy can tell us about Fred Rogers's attempt to rehabilitate children's television. ● X the Owl obsesses, Daniel Tiger regresses, Lady Elaine displaces anger, King Friday controls--how puppets can be used to teach us about feelings. ● Fred Rogers's indirect communication is key to the show, and most evident in the land of make-believe, where he doesn't make himself known. ● How Mister Rogers helps us see that the ordinary world is extraordinary, if we're willing to open ourselves up to it. ● How does Mister Rogers's method of teaching compare with Maria Montessori's? ● Fred Rogers and Carl Rogers have a lot in common: The Neighborhood is observed in the light of Rogerian therapy. ● Mister Rogers's view of evil is closer to Rousseau than to Voltaire. ● Fred Rogers gave a non-philosophical interpretation of the philosophical approach known as personalism. ● Daoism helps us understand how Fred Rogers, the antithesis of a stereotypical male, could achieve such success as a TV star. ● In the show and in his life, we can see how Rogers lived "the ethics of care." ● Puppets help children understand that persons are not isolated, but interconnected. ● Mister Rogers showed us that talking and singing about our feelings makes them more manageable.