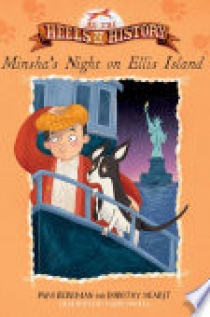 Follow Minsha, a determined terrier, as she travels to Ellis Island in this third book of the At the Heels of History series, inspired by important events and told through the eyes, ears, and noses of dogs. 1921. Minsha loves her human family, especially nine-year-old Leila. But Leila’s family has decided to leave their home in Beirut for a new life in America—and they can’t take Minsha with them. Minsha is devastated, but she’s also a dog of action, so she stows away on a second ship bound for New York. She knows she’s supposed to stay hidden away, but she can’t help but make friends with a boy named Yusef and his family. When their ship arrives at Ellis Island, Yusef is suspected of being sick and is separated from his family. Even though Minsha is anxious to find Leila, she can’t leave Yusef alone, either. As Minsha sniffs out a solution, she’ll have to contend with a territorial gang of cats, some helpful sparrows, and a surprisingly friendly rat. But will her new friends be enough to reunite Yusef and his family? And will it be too late for Minsha to reunite with hers?