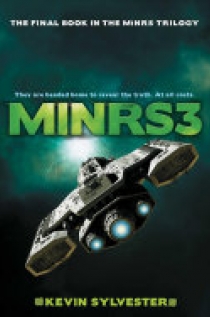 The action-packed conclusion to the MiNRS space adventure series, which School Library Journal praised for keeping readers “on the edge of their seats.” We do what we do best. Run. Hide. Survive. The children of Perses must return to Earth. They defeated Major Kirk Thatcher on their adopted planet, but his evil plans are still unfolding. People need to know the truth. Christopher has a video of Thatcher killing an injured grinder in cold blood. If they can show that to the people of Earth, they might just turn the tide. The MiNRs need to bear witness. A transport ship might get them back home, or it might send them spinning off into the deepest recesses of space. Is it worth the risk? Cracks begin to appear in the group. Darcy refuses to leave Perses, the only home she’s ever known. And Pavel’s mistrust of the grinders threatens to destroy them all. Once again, Christopher has to make tough choices, choices that will cost them dearly. And even when things seem to be going well, there are hidden dangers. A strange noise on their transport ship signals the return of their worst nightmare. And the Earth they left years before is not the Earth they will return to now. Can Christopher and his friends win the race to reveal the truth? Or will they escape one dangerous planet for one far worse?