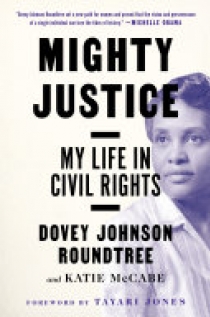 “Dovey Johnson Roundtree set a new path for women and proved that the vision and perseverance of a single individual can turn the tides of history.” —Michelle Obama In Mighty Justice, trailblazing African American civil rights attorney Dovey Johnson Roundtree recounts her inspiring life story that speaks movingly and urgently to our racially troubled times. From the streets of Charlotte, North Carolina, to the segregated courtrooms of the nation’s capital; from the male stronghold of the army where she broke gender and color barriers to the pulpits of churches where women had waited for years for the right to minister—in all these places, Roundtree sought justice. At a time when African American attorneys had to leave the courthouses to use the bathroom, Roundtree took on Washington’s white legal establishment and prevailed, winning a 1955 landmark bus desegregation case that would help to dismantle the practice of “separate but equal” and shatter Jim Crow laws. Later, she led the vanguard of women ordained to the ministry in the AME Church in 1961, merging her law practice with her ministry to fight for families and children being destroyed by urban violence. Dovey Roundtree passed away in 2018 at the age of 104. Though her achievements were significant and influential, she remains largely unknown to the American public. Mighty Justice corrects the historical record.