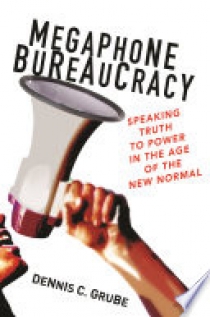 A revealing look at how today’s bureaucrats are finding their public voice in the era of 24-hour media Once relegated to the anonymous back rooms of democratic debate, our bureaucratic leaders are increasingly having to govern under the scrutiny of a 24-hour news cycle, hyperpartisan political oversight, and a restless populace that is increasingly distrustful of the people who govern them. Megaphone Bureaucracy reveals how today’s civil servants are finding a voice of their own as they join elected politicians on the public stage and jockey for advantage in the persuasion game of modern governance. In this timely and incisive book, Dennis Grube draws on in-depth interviews and compelling case studies from the United States, the United Kingdom, Australia, Canada, and New Zealand to describe how senior bureaucrats are finding themselves drawn into political debates they could once avoid. Faced with a political climate where polarization and media spin are at an all-time high, these modern mandarins negotiate blame games and manage contradictory expectations in the glare of an unforgiving spotlight. Grube argues that in this fiercely divided public square a new style of bureaucratic leadership is emerging, one that marries the robust independence of Washington agency heads with the prudent political neutrality of Westminster civil servants. These “Washminster” leaders do not avoid the public gaze, nor do they overtly court political controversy. Rather, they use their increasingly public pulpits to exert their own brand of persuasive power. Megaphone Bureaucracy shows how today’s senior bureaucrats are making their voices heard by embracing a new style of communication that brings with it great danger but also great opportunity.