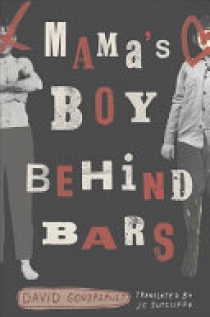 Now I've killed another person. I'm a serial killer. Sure, two people is hardly serial, but it's a good start. I'm still young. Who knows where opportunities might lead me? Opportunity makes the thief, or the murderer, or even the pastry chef. It's well documented. Mama's Boy Behind Bars is the second book in David Goudreault's wildly successful and darkly funny Mama's Boy trilogy. Once again written with gritty humour in the form of a confession, Mama's Boy Behind Bars, picks up where the first book in the series left off. Mama's Boy finds himself in jail following a tender and violent search for his long-lost mother. In an attempt to survive his incarceration, he sets out to make a name for himself in the prison and is desperate to achieve his ambition of joining the ranks of the hardcore criminals. But things get wildly complicated when he falls in love with a prison guard. Can Mama's Boy juggle love and crime? Priase for Mama's Boy "Despite the narrator's repellent behavior, readers will be drawn in by his quick wit, sharp observations, and childlike longing for his mother's love." --Publishers Weekly "There is a slyness at work here that Goudreault handles marvellously." &mdash: Canadian Notes and Queries