Madame Proust and the Kosher Kitchen 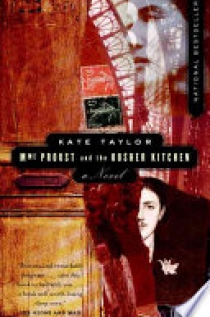 Stretching between turn-of-the-century Paris and contemporary Canada,Mme Proust and the Kosher Kitchenis the story of three women whose lives intersect across time to reveal the intrinsic bonds of our collective and personal histories. It is a rich and compassionate debut, a novel that encourages us to explore the depths of love and memory, of life and of art. Unable to escape the pain of her unrequited love for Max Segal, Marie Prévost travels to Paris in order to study the writing of her other great amour: the novelist Marcel Proust. Marie is bilingual and works as a simultaneous translator in Montreal, and believes that reading Proust’s original papers will give her insights into love and loss that just may mend her broken heart. But when Marie arrives in Paris, Marcel remains as elusive as Max: the strict officials at the Bibliotèque Nationale only allow her access to the peripheral papers of File 263 -- a much ignored and poorly catalogued collection of the diaries kept by Jeanne Proust, Marcel’s mother. Despite the head librarian’s opinion that they contain only the “natterings of a housewife,” Marie begins to translate them, and discovers that Jean Proust’s diary is as illuminating for what isnotsaid as what is there. Entwined with Marie’s story are the diary entries that she has translated: Jeanne Proust’s records of day-to-day life in her Paris household, which make up the second strand of this novel. Jeanne’s diary includes all aspects of life at 9 Boulevard Malesherbes, everything from the difficulties of cutting rich desserts from the dinner menu to the latest Parisian headlines to her fears for the health and literary ambitions of Marcel. She’s a worrier, Madame Proust, but also ferociously protective and supportive of her frail son, and the trials of her small world come across as powerfully as the goings-on outside her doors. Madame Proust’s diary entries, particularly those from the height of the Dreyfus Affair, also convey her experiences as a Jewish woman within a prominent Catholic family and a privileged social class. And it is this thread that makes Marie recognize the difficulties of finding the woman’s true voice, given the atrocities to come during the Second World War. As she continues her work, Marie increasingly explores the devastation of the Holocaust and wonders about our collective responsibility to remembering -- and recording -- it’s truths. Her explorations of Paris, first limited to the Proustian tour, begin to include memorial sites such as the one at Drancy, a transit camp on the route to Auschwitz. During her travels she comes across references to Max’s mother’s family, the Bensimons, and begins to make connections between the overbearing mother Max so often complains about and Madame Proust. She also starts to recognize the horrible burden Sarah Segal must carry. Sarah’s story is the third strand of this novel. Sarah Segal -- née Bensimon, then Simon -- was sent to Canada from France at age twelve, just as the Nazis were beginning to round up Parisian Jews. Growing up with her foster family in Toronto, she is never able to escape the loss of her parents, and as a young woman she travels back to Paris to discover that they did, in fact, die at Auschwitz. But despite -- and perhaps due to -- finding out what happened to them, Sarah is unable to fully adjust to her life in Canada. She doesn’t know how to communicate with her son or her husband, and finds even the most mundane domestic events overwhelming. It is only when she retreats to her kitchen, determined to fuse her French and Jewish histories by mastering a kosher version of classic French cuisine, that she begins to face her sorrow head on. Mme Proust and the Kosher Kitchenis Kate Taylor’s first novel, and has been highly praised by reviewers. Most comment on Taylor’s wonderful ability to weave together three distinct stories in such a way that the larger truths emerge from among their combined details, and on the subtle way she is able to meld history and fiction. As one literary critic has stated, “Mme Proust and the Kosher Kitchenmarks the stunning emergence of a writer from whom we can expect much in the future.”