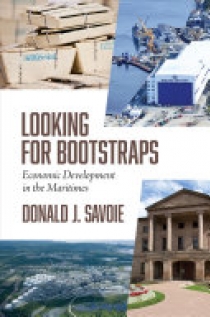 In 2006, award-winning author Donald Savoie wrote a seminal book on economic development in the Maritimes: Visiting Grandchildren. His plans were "to exit the field with this book." A decade later, he marks his return to that subject with Looking for Bootstraps. Concerned about the region's future, he sought to explore and explain the reasons behind its lack of economic development. The result will spark a much-needed debate about the future of the Maritime provinces. Drawing on his past involvement in regional development (senior policy advisor to former minister of DREE; involvement in establishment of ACOA) and on his earlier work, Savoie brings a fresh perspective to an age-old problem and ask the tough questions: Why has the Maritime region not developed as well as other Canadian regions, and what can we do about it?