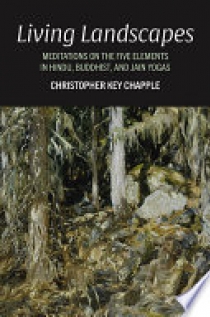 Explores the role of meditation on the five elements in the practice of Yoga. In Living Landscapes, Christopher Key Chapple looks at the world of ritual as enacted in three faiths of India. He begins with an exploration of the relationship between the body and the world as found in the cosmological cartography of Sāṃkhya philosophy, which highlights the interplay between consciousness (puruṣa) and activity (prakṛti), a process that gives rise to earth, water, fire, air, and space. He then turns to the progressive explication of these five great elements in Buddhism, Jainism, Advaita, Tantra, and Haṭha Yoga, and includes translations from the Vedas and the Purāṇas of Hinduism, the Buddhist and Jain Sūtras, and select animal fables from early Hinduism, Buddhism, and Jainism. Chapple also describes his own pilgrimages to the Great Stupa at Shambhala Mountain Center in Colorado, the five elemental temples (pañcamahābhūta mandir) in south India, and the Jaina cosmology complex in Hastinapur. An appendix with practical instructions that integrate Yoga postures with meditative reflections on the five elements is included. “Chapple has brought together material that informs and educates others into the depth and profundity of what Yoga is and its relevance today. It is a timely work in our recognition of the need for greater reflection, contemplation, awakening, and action for the benefit of all life.” — Ian Whicher, coeditor of Yoga: The Indian Tradition