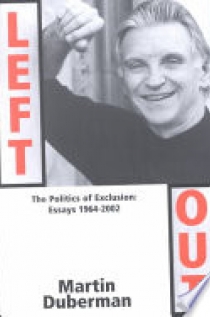 "One would be hard-pressed to name a more admirable contemporary American example of the intellectual engage than Martin Duberman. Historian, playwright, memoirist, biographer, social commentator, teacher, activist and assured podium performer, Duberman is an unapologetic, uncategorizable and nonsectarian radical whose constant questioning of conventional wisdoms - even on the left - has made him one of this country's pre-eminent participants in the political and cultural wars that have riven public life."â__In These Times"A marvelous collection of a lifetime of courageous writing by a deeply moral and reflective man who has engaged the greatest struggles of our times with an unflinching nerve, a wise heart and a brilliant intellect informed at all times by compassion."â__Jonathan KozolThe lives of â__outsidersâ__ have been the focus of Martin Duberman's work as a public intellectual for the past four decades. Best known for his biography of Paul Robeson, Duberman highlights the "banding together" of the excluded in Left Out. These identity-based movementsâ__black power, gay liberation, feminismâ__have created a vital and controversial change in American consciousness in recent decades. Duberman's collected essays trace this evolution of thought to the history of dissent from abolitionism through the New Left to today's organizing.Presenting summations of Duberman's views on such matters as race, foreign policy, gender and sexuality, Left Out offers incisive analyses of the split between class-based and identity-based politics on the Left. The "godfather" of the gay studies movement, Duberman has taken many brave and prescient stands. His writing shows why he is considered a deeply moral and wise man. For the first time available in paperback, this edition, updated through 2002, includes three new essays: "The State of Gay Studies," "Queer Economic Justice," and "Jewish Radicals, Effeminacy, and the Rise of Gay Chauvinism".