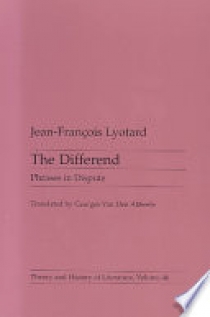 In The Differend, Lyotard subjects to scrutiny- from the particular perspective of his notion of 'differend' (difference in the sense of dispute)- the turn of all Western philosophies toward language; the decline of metaphysics; the present intellectual retreat of Marxism; the hopes raised and mostly dashed, by theory; and the growing political despair. Taking his point of departure in an analysis of what Auschwitz meant philosophically, Lyotard attempts to sketch out modes of thought for our present.