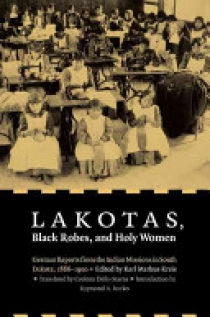 Lakotas, Black Robes, and Holy Women makes available in English a rare collection of eyewitness accounts by German Catholic missionaries among the Lakotas in the late nineteenth century. German missionaries played an important role in the early years of the St. Francis mission on the Rosebud Reservation, and the Holy Rosary mission on the Pine Ridge Reservation, both in South Dakota. Although the accounts reflect the dominant perspective and attitude of missionaries and white teachers in the period of assimilation policy, they also offer firsthand accounts of the Lakotas in the early reservation years by Jesuits who saw themselves as friends and defenders of the Indians against a government policy they considered inappropriate and harmful. During the watershed years of 1886-1900, the German missionaries witnessed and participated in key events in the history of the American West, including the Ghost Dance, the Wounded Knee massacre, the Drexel Mission fight, the repression of Lakota rituals, and the growing importance of Catholicism for many Lakotas. The volume also describes the role of women in the mission and the process of converting and schooling Lakotas. Karl Markus Kreis is a professor emeritus of political science at the University of Applied Sciences in Dortmund, Germany. Corinna Dally-Starna is currently transcribing and translating Moravian mission records for the Mashantucket Pequot Tribal Nation Museum. Raymond A. Bucko, S.J., is the director of the Native American Studies Program and a professor and chair of the Department of Sociology and Anthropology at Creighton University.