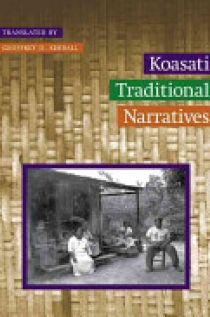 Koasati Traditional Narratives is the first published collection of oral literature of the Koasati Indians, who at the time of first contact with the West lived in the upper Tennessee River valley but now predominantly reside in western Louisiana. The works were gathered from several narrators between 1910 and 1992 by John R. Swanton, Mary R. Haas, Geoffrey D. Kimball, and others, and are presented in the original Koasati verse and in English translation. Because the Koasatis were full participants in the high civilization of the Mississippian period, with a complex aristocratic society, their oral literature exhibits considerable sophistication. The narratives are at turns serious, humorous, frightening, ironic, fantastic, and satiric, and serve both as a window to the mythohistoric past of the Koasatis and as a guide to their present. Encounters with Europeans, African slaves, and other Indian groups enabled Koasati narrators to engage their adaptive genius, and many of their tales derive from, among others, the Tunicas, the fables of La Fontaine, and the Book of Genesis. Part 1 includes mythological narratives, including Trickster rabbit stories, origin tales, monster stories, animal tales, medicine origin tales, and Christian tales. Part 2 features semihistorical narratives, including encounter stories and war stories, among others. Multiple renditions of some narratives are included, for traditional narratives were not set texts that were memorized but rather set plot elements through which narrators could display their verbal skills.