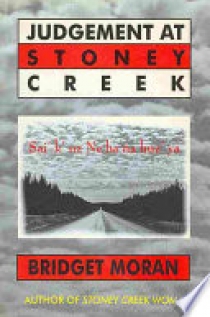 Judgement at Stoney Creek has been released in a new edition of an aboriginal studies classic: an engrossing look at the investigation into the hit-and-run death of Coreen Thomas, a young Native woman in her ninth month of pregnancy, at the wheels of a car driven by a young white man in central BC. The resulting inquest into what might have been just another small-town tragedy turned into an inquiry of racial tensions, both implicit and explicit, that surfaced not only on country backroads but in the courtroom as well, revealing a dual system of justice that treated whites and aboriginals differently. First published in 1990, Judgement at Stoney Creek has been hailed for its moving and deeply personal depiction of a controversial subject that continues to make news today-how the justice system has failed Canada's aboriginal people. This new edition includes a new preface by the author, who returns to the area to discover how much racial relations, and the relationship between Natives and the justice system, have changed.