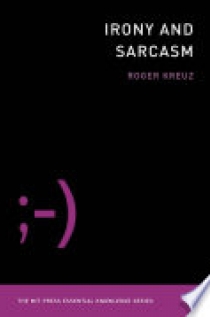 A biography of two troublesome words. Isn't it ironic? Or is it? Never mind, I'm just being sarcastic (or am I?). Irony and sarcasm are two of the most misused, misapplied, and misunderstood words in our conversational lexicon. In this volume in the MIT Press Essential Knowledge series, psycholinguist Roger Kreuz offers an enlightening and concise overview of the life and times of these two terms, mapping their evolution from Greek philosophy and Roman rhetoric to modern literary criticism to emojis. Kreuz describes eight different ways that irony has been used through the centuries, proceeding from Socratic to dramatic to cosmic irony. He explains that verbal irony—irony as it is traditionally understood—refers to statements that mean something different (frequently the opposite) of what is literally intended, and defines sarcasm as a type of verbal irony. Kreuz outlines the prerequisites for irony and sarcasm (one of which is a shared frame of reference); clarifies what irony is not (coincidence, paradox, satire) and what it can be (among other things, a socially acceptable way to express hostility); recounts ways that people can signal their ironic intentions; and considers the difficulties of online irony. Finally, he wonders if, because irony refers to so many different phenomena, people may gradually stop using the word, with sarcasm taking over its verbal duties.