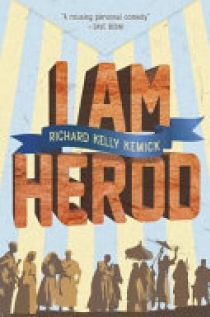 Losing religion one false beard at a time. Life of Brianmeets Woody Allen. Reporting from Inside the Fraying Hem of Christ Himself On a whim, armchair-atheist Richard Kelly Kemick joins the 100-plus cast of The Canadian Badlands Passion Play, North America's largest production of its kind and one of the main tourist attractions in Alberta. By the time closing night is over, Kemick has a story to tell. From the controversial choice of casting to the bizarre life in rehearsal, this glorious behind-the-scenes look at one of Canada's strangest theatrical spectacles also confronts the role of religion in contemporary life and the void left by its absence for non-believers. In the tradition of tragic luminaries such as David Foster Wallace, Jonathan Goldstein, and David Sedaris, I Am Herodgives its congregation of readers unparalleled access to the players of the Passion: there's Judas, who wears a leather jacket even when it's 30˚C; the Chief Sadducee, who is ostracized for his fanaticism; Pilate, the only actor who swears; the Holy Spirit, who is breaking ground as the role's first female actor; and the understudy Christ, the previous year's real-deal Christ who was demoted to backup and now performs illicit one-man shows backstage.