How to Raise a Boyfriend 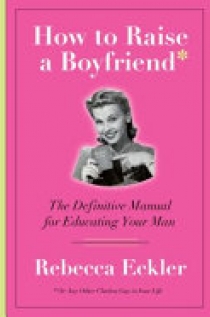 Rebecca Eckler shows women everywhere that while they're busy offering not-so-casual advice and reprimands to the men in their life, they've lost sight of an important fact: they're not dating a boyfriend, they're raising a boyfriend. He wandered away from the checkout, leaving her to cope with an overflowing shopping car. He dashed in front of her to cross a busy intersection without so much as a backwards glance. He forgot -- forgot! -- to meet her at the airport after a trip. And then an inescapable truth settled in: Rebecca Eckler already had a six-year-old daughter, so what was she doing with a boyfriend who was even worse behaved? There were only two options. Dump the sucker and concentrate on raising her child. Or raise her boyfriend, too. From making introductions, to offering compliments, to saying you're sorry, boyfriends need to be raised with the same lessons we use on our kids. As Rebecca writes, "If I can raise a child -- a smart, kind and polite one -- surely I can raise a boyfriend, too."