How to Pronounce Knife 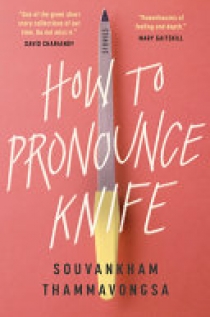 Featuring stories that have appeared in Harper's, Granta, and The Paris Review, this revelatory debut collection from O. Henry Award winner Souvankham Thammavongsa establishes her as an essential new voice in Canadian and world literature. A young man painting nails at the local salon. A woman plucking feathers at a chicken processing plant. A father who packs furniture to move into homes he'll never afford. A mother who works nights alongside her daughter, harvesting worms. A housewife learning English from daytime soap operas. In her startling debut book of fiction, Souvankham Thammavongsa vividly captures the day-to-day lives of immigrants and refugees, illuminating their hopes, disappointments, love affairs, acts of defiance--and, above all, their pursuit of a place to belong. In spare, intimate prose charged with emotional power and a sly wit, she paints an indelible portrait of watchful children, wounded men, and restless women caught between cultures, languages, and values. Told with compassion, wry humour, and an unflinching eye for the often absurd realities of having to start your life over again, these stories honour characters struggling to find their bearings far from home, even as they do the necessary "grunt work of the world." A daughter becomes an unwilling accomplice in her mother's growing infatuation with country singer Randy Travis. After a boxer loses his dream of becoming a championship fighter, he finds an unexpected chance at redemption while working at his sister's nail salon. When a seventy-year-old woman begins a relationship with her much younger neighbour, her assumptions about the limits of love unravel. As he watches his wife gradually drift into an affair with her boss, a school bus driver must grapple with what he's willing to give up in order to belong. And in the Commonwealth Short Story Prize-shortlisted title story, a young girl's unconditional love for her father transcends the fickleness of language. Unsentimental yet tender, and fiercely alive, How to Pronounce Knife announces Souvankham Thammavongsa as one of the most striking voices of her generation.