How to Be a Bad Emperor 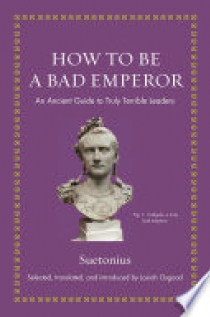 "Gaius Suetonius Tranquillus was secretary of correspondence for the emperor Hadrian and author of the multi-part biography, Lives of the Caesars. A landmark in the development of realistic biography-writing, this work gives an account of twelve emperors, beginning with Julius Caesar. In each biography, Suetonius moves beyond the great events of Roman history and sets out to reveal the small and telling details of his subjects' lives. Suetonius' zeal in accumulating and relating what may appear to be trivial has sometimes led to the charge that he was little better than a gossip. Yet he was interested in deeper questions that fascinate political observers today. It is Suetonius' view that emperors ultimately had the power to achieve much both for good and for ill. Augustus beautified Rome, improved its infrastructure, restored its religion, and promoted discipline in the army. But other emperors, such as Tiberius, Caligula, and Nero, infamously used their power to indulge vice and harm others. Ever since their publication, Suetonius' imperial biographies have appealed to readers, both because of their sensational stories and the larger questions of power they raise. They spawned many sequels in antiquity (as well as more recent works like Robert Graves's famed, I, Claudius). While a number of good English translations are in print, reading Lives of the Caesar from cover to cover can be daunting, so many details are included. Also general readers, including students, are really interested in the stories of the bad emperors. This book, then, in a reversal of the usual self-help formula that Suetonius would appreciate, offers selections from the lives of four bad emperors (Julius Caesar, Tiberius, Caligula, and Nero) to create a guide on how to be a bad leader. own worst qualities and become more dangerous to us than any enemy. Osgood will start the volume with an introduction to Suetonius and his biographies, and also include introductions and (as appropriate, epilogues) to the individual selections. These will offer a reader already acquainted with Suetonius a better sense of the biographer's achievement and value as well as some ideas on why autocrats, or would-be autocrats, have always proven a rich subject for biographers"--