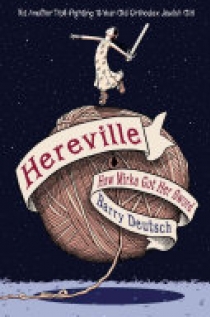 "Welcome to Hereville, home of wisecracking, adventure-loving, sword-wielding Orthodox Jewish heroine Mirka. A delightful mix of fantasy, adventure, cultural traditions, and preteen commotion, this fun, quirky graphic novel series has captivated middle-school readers with its exciting visuals and entertainingly unique heroine. In her third adventure, Mirka is still the only monster-fighting girl in town ... except for a little new competition from Layele, her six-year-old sister, who is determined to get them both into trouble. Unluckily for babysitter Mirka, one very cranky magic fish who's had a run-in with Mirka's family before is determined to cause as much trouble as it can. No matter how hard Mirka fights this fish-out-of-water--even with the help of a not-so-helpful Troll--it just gets stronger. She's going to have to find a way to trick it into leaving her and her family alone before she gets in too deep!"--