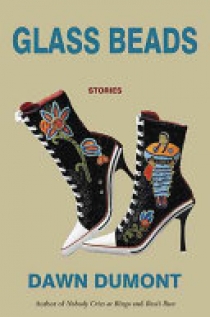 Theseshort stories interconnect the friendships of four First Nations people — Everett Kaiswatim, Nellie Gordon, Julie Papequash, and Nathan (Taz) Mosquito — as the collection evolves over two decades against the cultural, political, and historical backdrop of the 90s and early 2000s. These young people are among the first of their families to live off the reserve for most of their adult lives, and must adapt and evolve. In stories like “Stranger Danger”, we watch how shy Julie, though supported by her roomies, is filled with apprehension as she goes on her first white-guy date, while years later in “Two Years Less A Day” we witness her change as her worries and vulnerability are put to the real test when she is unjustly convicted in a violent melee and must serve some jail time. “The House and Things That Can Be Taken” establishes how the move from the city both excites and intimidate reserve youth — respectively, how a young man finds a job or a young woman becomes vulnerable in the bar scene. As well as developing her characters experientially, Dumont carefully contrasts them, as we see in the fragile and uncertain Everett and the culturally strong and independent but reckless Taz. As the four friends experience family catastrophes, broken friendships, travel to Mexico, and the aftermath of the great tragedy of 9/11, readers are intimately connected with each struggle, whether it is with racism, isolation, finding their cultural identity, or repairing the wounds of their upbringing.

By Margaret Atwood
September 10, 2019 | 432 pages
In this brilliant sequel to The Handmaid's Tale, acclaimed author Margaret Atwood answers the questions that have tantalized readers for decades. When the van door slammed on Offred's future at the end of The Handmaid's Tale, readers had no way of telling what lay ahead. With The Testaments, the...  END_OF_DOCUMENT_TOKEN_TO_BE_REPLACED
Literature - Canadian

Honouring the Strength of Indian Women

By Vera Manuel
April 26, 2019 | 416 pages
This critical edition delivers a unique and comprehensive collection of the works of Ktunaxa-Secwepemc writer and educator Vera Manuel, daughter of prominent Indigenous leaders Marceline Paul and George Manuel. A vibrant force in the burgeoning Indigenous theatre scene, Vera was at the forefront of...  END_OF_DOCUMENT_TOKEN_TO_BE_REPLACED
Literature - Canadian

By David Bezmozgis
Harper Perennial | March 17, 2020 | 176 pages
FINALIST FOR THE 2019 SCOTIABANK GILLER PRIZE Award-winning author David Bezmozgis's first story collection in more than a decade, hailed by the Toronto Star as "intelligent, funny, unfailingly sympathetic" In the title story, a father and his young daughter stumble into a bizarre version of his...  END_OF_DOCUMENT_TOKEN_TO_BE_REPLACED
Literature - Canadian

By Alastair Luft
Inkshares | June 27, 2017 | 350 pages
A soldier struggles with post-traumatic stress disorder, risking his marriage, career, and life itself in a bid for redemption.   END_OF_DOCUMENT_TOKEN_TO_BE_REPLACED
Literature - Canadian

By Douglas Gary Joseph Freeman
November 1, 2019 | 380 pages
When Preston Downs, Jr., alias Prez, slides down the emergency chute onto the frozen tarmac at the Montreal airport, little does he know that returning home to Washington D.C. or to his adopted city, Chicago, would now be impossible. Events had sped by after a dust-up with the Chicago police. With...  END_OF_DOCUMENT_TOKEN_TO_BE_REPLACED
Literature - Canadian