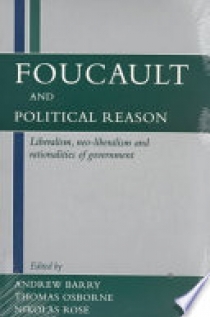 Despite the enormous influence of Michel Foucault in gender studies, social theory, and cultural studies, his work has been relatively neglected in the study of politics. Although he never published a book on the state, in the late 1970s Foucault examined the technologies of power used to regulate society and the ingenious recasting of power and agency that he saw as both consequence and condition of their operation. These twelve essays provide a critical introduction to Foucault's work on politics, exploring its relevance to past and current thinking about liberal and neo-liberal forms of government. Moving away from the great texts of liberal political philosophy, this book looks closely at the technical means with which the ideals of liberal political rationalities have been put into practice in such areas as schools, welfare, and the insurance industry. This fresh approach to one of the seminal thinkers of the twentieth century is essential reading for anyone interested in social and cultural theory, sociology, and politics.