Final Report of the Truth and Reconciliation Commission of Canada, Volume One: Summary

By The Truth and Reconciliation Commission of Canada 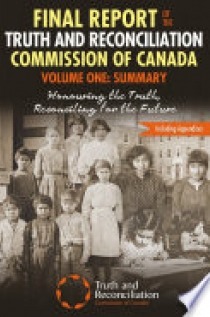 This is the Final Report of Canada's Truth and Reconciliation Commission and its six-year investigation of the residential school system for Aboriginal youth and the legacy of these schools. This report, the summary volume, includes the history of residential schools, the legacy of that school system, and the full text of the Commission's 94 recommendations for action to address that legacy. This report lays bare a part of Canada's history that until recently was little-known to most non-Aboriginal Canadians. The Commission discusses the logic of the colonization of Canada's territories, and why and how policy and practice developed to end the existence of distinct societies of Aboriginal peoples. Using brief excerpts from the powerful testimony heard from Survivors, this report documents the residential school system which forced children into institutions where they were forbidden to speak their language, required to discard their clothing in favour of institutional wear, given inadequate food, housed in inferior and fire-prone buildings, required to work when they should have been studying, and subjected to emotional, psychological and often physical abuse. In this setting, cruel punishments were all too common, as was sexual abuse. More than 30,000 Survivors have been compensated financially by the Government of Canada for their experiences in residential schools, but the legacy of this experience is ongoing today. This report explains the links to high rates of Aboriginal children being taken from their families, abuse of drugs and alcohol, and high rates of suicide. The report documents the drastic decline in the presence of Aboriginal languages, even as Survivors and others work to maintain their distinctive cultures, traditions, and governance. The report offers 94 calls to action on the part of governments, churches, public institutions and non-Aboriginal Canadians as a path to meaningful reconciliation of Canada today with Aboriginal citizens. Even though the historical experience of residential schools constituted an act of cultural genocide by Canadian government authorities, the United Nation's declaration of the rights of aboriginal peoples and the specific recommendations of the Commission offer a path to move from apology for these events to true reconciliation that can be embraced by all Canadians.