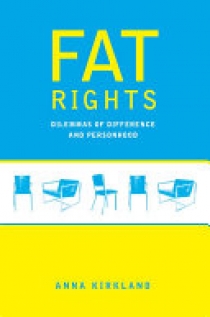 Author Interview on The Brian Lehrer Show America is a weight-obsessed nation. Over the last decade, there's been an explosion of concern in the U.S. about people getting fatter. Plaintiffs are now filing lawsuits arguing that discrimination against fat people should be illegal. Fat Rights asks the first provocative questions that need to be raised about adding weight to lists of currently protected traits like race, gender, and disability. Is body fat an indicator of a character flaw or of incompetence on the job? Does it pose risks or costs to employers they should be allowed to evade? Or is it simply a stigmatized difference that does not bear on the ability to perform most jobs? Could we imagine fatness as part of workplace diversity? Considering fat discrimination prompts us to rethink these basic questions that lawyers, judges, and ordinary citizens ask before a new trait begins to look suitable for antidiscrimination coverage. Fat Rights draws on little-known legal cases brought by fat citizens as well as significant lawsuits over other forms of bodily difference (such as transgenderism), asking why the boundaries of our antidiscrimination laws rest where they do. Fatness, argues Kirkland, is both similar to and provocatively different from other protected traits, raising long–standing dilemmas in antidiscrimination law into stark relief. Though options for defending difference may be scarce, Kirkland evaluates the available strategies and proposes new ways of navigating this new legal question. Fat Rights enters the fray of the obesity debate from a new perspective: our inherited civil rights tradition. The scope is broad, covering much more than just weight discrimination and drawing the reader into the larger context of antidiscrimination protections and how they can be justified for a new group.