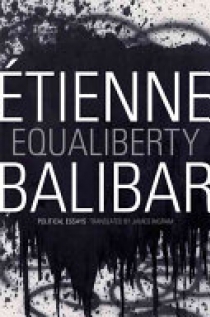 First published in French in 2010, Equaliberty brings together essays by Étienne Balibar, one of the preeminent political theorists of our time. The book is organized around "equaliberty," a term coined by Balibar to connote the tension between the two ideals of modern democracy: equality (of social rights and political representation) and liberty (the freedom citizens have to contest the social contract). Balibar's theory of equaliberty pits the rights of the person against those of the citizen. He finds the tension between these different kinds of rights to be ingrained in the constitutional nation-state. At the same time, he seeks to keep rights discourse open, eschewing natural rights in favor of rights as a project of states and citizens. Deeply engaged with other thinkers, including Arendt, Rancière, and Laclau, he posits a theory of the state based on social relations. InEqualiberty Balibar brings both the continental and analytic philosophical traditions to bear on the conflicted relations between humanity and citizenship.