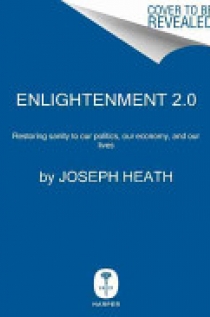 Over the last twenty years, the political systems of the western world have become increasingly divided-not between right and left, but between crazy and non-crazy. What’s more, the crazies seem to be gaining the upper hand. Rational thought cannot prevail in the current social and media environment, where elections are won by appealing to voters’ hearts rather than their minds. The rapid-fire pace of modern politics, the hypnotic repetition of daily news items and even the multitude of visual sources of information all make it difficult for the voice of reason to be heard. In Enlightenment 2.0, bestselling author Joseph Heath outlines a program for a second Enlightenment. The answer, he argues, lies in a new “slow politics.” It takes as its point of departure recent psychological and philosophical research, which identifies quite clearly the social and environmental preconditions for the exercise of rational thought. It is impossible to restore sanity merely by being sane and trying to speak in a reasonable tone of voice. The only way to restore sanity is by engaging in collective action against the social conditions that have crowded it out.