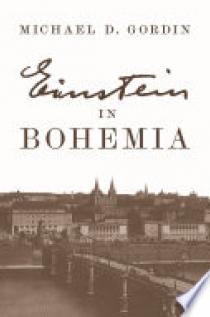 "Though Einstein is undoubtedly one of the most important figures in the history of modern science, he was in many respects marginal. Despite being one of the creators of quantum theory, he remained skeptical of it, and his major research program while in Princeton -the quest for a unified field- ultimately failed. In this book, Michael Gordin explores this paradox in Einstein's life by concentrating on a brief and often overlooked interlude: his tenure as professor of physics in Prague, from April of 1911 to the summer of 1912. Though often dismissed by biographers and scholars, it was a crucial year for Einstein both personally and scientifically: his marriage deteriorated, he began thinking seriously about his Jewish identity for the first time, he attempted a new explanation for gravitation-which though it failed had a significant impact on his later work-and he met numerous individuals, including Max Brod, Hugo Bergmann, Philipp Frank, and Arnošt Kolman, who would continue to influence him. In a kind of double-biography of the figure and the city, this book links Prague and Einstein together. Like the man, the city exhibits the same paradox of being both central and marginal to the main contours of European history. It was to become the capital of the Czech Republic but it was always, compared to Vienna and Budapest, less central in the Habsburg Empire. Moreover, it was home to a lively Germanophone intellectual and artistic scene, thought the vast majority of its population spoke only Czech. By emphasizing the marginality and the centrality of both Einstein and Prague, Gordin sheds new light both on Einstein's life and career and on the intellectual and scientific life of the city in the early twentieth century"--