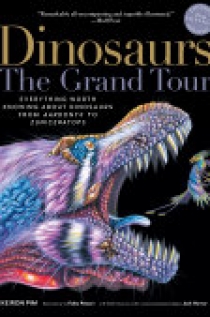 We live in a golden age of archaeological discovery—the perfect time to dig into the spectacular world of dinosaurs. From Aardonyx, a lumbering beast that formed a link between two‐ and four‐legged dinosaurs, to Zuniceratops, who boasted a deadly pair of horns, Dinosaurs—The Grand Tour, Second Edition details everything worth knowing about more than 300 dinosaurs. The important discoveries and gory details touch on topics from geology, anatomy, and evolution to astronomy and even Native American and Chinese myth. Fascinating facts abound: Giganotosaurus was longer, two tons heavier, and had bigger jaws than T. Rex. The poison‐spitting Dilophosaurus from Jurassic Park wasn’t actually venomous at all. Because of its bizarre single‐clawed hands, scientists now believe Mononykus was a prehistoric ancestor of the anteater! Illustrations on virtually every page, true to the latest findings, bring these prehistoric creatures to life in all their razor‐sharp, long‐necked, spiny, scaly glory.