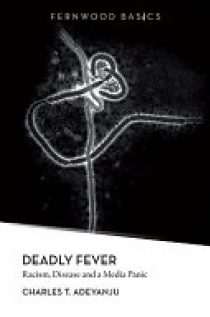 Focusing on a 2001 Canadian news story that turned into a frantic rumor mill, this study analyses how media reporting on health issues often alarms the public, particularly when the race or immigration status of the sufferers is part of the coverage. In this case, a woman from the Congo was admitted to a hospital in Hamilton, Ontario, with a serious illness of unknown origin. Even though it was quickly determined that she did not carry the deadly Ebola virus, conjectures still spread through the Canadian media. Looking back at the event, this investigation conducts a content analysis of four major Canadian newspapers that carried the Hamilton story—as well as interviews with medical and other experts—and concludes that there was never any danger to the public.

By Richard Kelly Kemick
October 8, 2019 | 240 pages
Losing religion one false beard at a time. Life of Brianmeets Woody Allen. Reporting from Inside the Fraying Hem of Christ Himself On a whim, armchair-atheist Richard Kelly Kemick joins the 100-plus cast of The Canadian Badlands Passion Play, North America's largest production of its kind and one...  END_OF_DOCUMENT_TOKEN_TO_BE_REPLACED
Social Sciences

By Michele Friedner,  Karen Weingarten
July 12, 2019 | 200 pages
This special issue examines the stakes of orienting toward or away from disability as a category and as a method. Building on Sara Ahmed's conceptualization of "orientation" as the situating of queer and raced bodies, the contributors ask how the category of disability might also change how we...  END_OF_DOCUMENT_TOKEN_TO_BE_REPLACED
Social Sciences

Blinded by the Whites

By David H. Ikard,  David Ikard
March 29, 2020 | 173 pages
The election of Barack Obama gave political currency to the (white) idea that Americans now live in a post-racial society. But the persistence of racial profiling, economic inequality between blacks and whites, disproportionate numbers of black prisoners, and disparities in health and access to...  END_OF_DOCUMENT_TOKEN_TO_BE_REPLACED
Social Sciences

The Cure for Hate

By Tony McAleer
October 1, 2019 | 320 pages
A powerful and deeply personal book about the roots of racism, and what can be done to eradicate it.   END_OF_DOCUMENT_TOKEN_TO_BE_REPLACED
Social Sciences

By Olena Hankivsky
UBC Press | March 29, 2020 | 178 pages
"In this book, Hankivsky considers the implications of this ethic for a range of Canadian social policy issues. Through a series of case studies, she demonstrates the extent to which a care orientation differs from a justice orientation, and provides an alternative normative framework for...  END_OF_DOCUMENT_TOKEN_TO_BE_REPLACED
Social Sciences