Dark Side of the Light 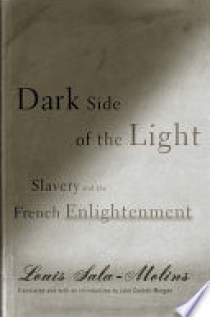 Enlightenment thinkers such as Rousseau and Montesquieu are best known for their humanist theories and liberating influence on Western civilization. But as renowned French intellectual Louis Sala-Molins shows, Enlightenment discourses and scholars were also complicit in the Atlantic slave trade, becoming instruments of oppression and inequality. Translated into English for the first time, Dark Side of the Light scrutinizes Condorcet’s Reflections on Negro Slavery and the works of Montesquieu, Rousseau, and Diderot side by side with the Code Noir (the royal document that codified the rules of French Caribbean slavery) in order to uncover attempts to uphold the humanist project of the Enlightenment while simultaneously justifying slavery. Wielding the pen of both the ironist and the moralist, Sala-Molins demonstrates the flawed nature of these attempts and the reasons given for this denial of rights, from the imperatives of public order to the incomplete humanity of the slave (and thus the need for his progressive humanization through slavery), to the economic prosperity that depended on his labor. At the same time, Sala-Molins uses the techniques of literature to give equal weight to the perspective of the “barefooted, the starving, and the slaves” through expository prose and scenes between slave and philosopher, giving moral agency and flesh-and-blood dimensions to issues most often treated as abstractions. Both an urgent critique and a measured analysis, Dark Side of the Light reveals the moral paradoxes of Enlightenment philosophies and their world-changing consequences. Louis Sala-Molins is a moral and political philosopher and emeritus professor at the University of Toulouse. He is the author of many books, including Le Code Noir, ou Le calvaire de Canaan and L’Afrique aux Amériques. John Conteh-Morgan is associate professor of French and Francophone, African-American, and African studies at Ohio State University. He is the author of Theatre and Drama in Francophone Africa: A Critical Introduction.