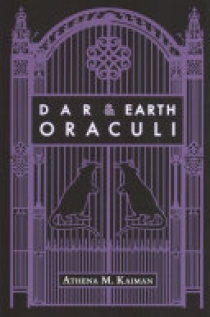 DAR & Earth is a debut YA fantasy series rooted in accurate historical and scientific facts. ORACULI begins the odyssey of these two worlds, interconnected by a shared sun. Through the protagonist Aelish, a magical being born of human parents in 1546 Ireland, and her Oraculi, Lady Antonia, born in 1521 at King Henry VIII's Court, learn about the history of DAR & Earth from medieval times to present day. From the devastation of the plague, to the current threat of humanity's extinction from anthropogenic climate change, experience how politics, religion, science, and ideology collide in both worlds. DAR, a magical commonwealth governed by females, brings hope to Aelish after her parents die of plague, her magical abilities unable to save them. With the help of Lady Antonia, Aelish journeys to DAR at seventeen. But the refuge of her new home, soon takes a dark turn. While falling in love with Thagar, Commander of the S.E. Quadrant, as a young student of magic, Aelish discovers something horrific about the magical realm of Komprathia, ruled by the tyrant King Gidius. Aelish defies everyone she loves and trusts, as well as the laws of DAR. She endangers her life to pursue a quest to stop the plague on Earth and exact revenge for the deaths of her parents on an enemy she has never met. In present day, Aelish is sent back to Earth by the leaders of DAR to become an Oraculi to a human child--something that's never been done before. In a bid to harness the exceptional scientific aptitude of a twelve-year-old girl of Mexican descent, DAR risks revealing their world to Earth. It is the hope of the governing females that Isabela will become a leader in combating the imminent ravages of climate change. But Isabela is unraveling under the despair of her mother's battle with cancer and wants nothing to do with DAR. Will Aelish fail in her first mission as an Oraculi, as she desperately tries to save her birthplace?