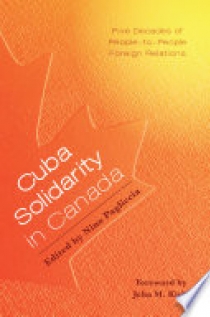 Cuba Solidarity in Canada - Five Decades of People-to-People Foreign Relations, is a collection of essays about the Canadian solidarity movement in support of Cuba during more than 50 years. Throughout the different experiential stories, the notion of solidarity emerges as the common theme of people-to-people (non-governmental) links between Canada and Cuba. The book suggests a framework that informs the reader on the meaning, positive influence and potentially valuable role that solidarity can play in the relationship between peoples, indeed between nations. It also advances the possibility of a new paradigm of state-to-state foreign relations that is based on solidarity instead of ideological posture.