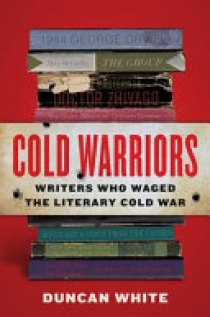 A brilliant, invigorating account of the great writers on both sides of the Iron Curtain who played the dangerous games of espionage, dissidence and subversion that changed the course of the Cold War. During the Cold War, literature was both sword and noose. Novels, essays and poems could win the hearts and minds of those caught between the competing creeds of capitalism and communism. They could also lead to exile, imprisonment or execution if they offended those in power. The clandestine intelligence services of the United States, Britain and the Soviet Union had secret agents and vast propaganda networks devoted to literary warfare. But the battles were personal, too: friends turning on each other, lovers cleaved by political fissures, artists undermined by inadvertent complicities. In Cold Warriors, Harvard University’s Duncan White vividly chronicles how this ferocious intellectual struggle was waged on both sides of the Iron Curtain. The book has at its heart five major writers—George Orwell, Stephen Spender, Mary McCarthy, Graham Greene and Andrei Sinyavsky—but the full cast includes a dazzling array of giants, among them Aleksandr Solzhenitsyn, John le Carré, Richard Wright, Ernest Hemingway, Boris Pasternak, Gioconda Belli, Arthur Koestler, Vaclav Havel, Joan Didion, Isaac Babel, Howard Fast, Lillian Hellman, Mikhail Sholokhov —and scores more. Spanning decades and continents and spectacularly meshing gripping narrative with perceptive literary detective work, Cold Warriors is a welcome reminder that, at a moment when ignorance is celebrated and reading seen as increasingly irrelevant, writers and books can change the world. Cold Warriors includes 20-30 black-and-white photographs.

Fifty Maps and the Stories They Tell

By Jerry Brotton,  Nick Millea
July 5, 2019 | 144 pages
From medieval maps to digital cartograms, this book features highlights from the Bodleian Library's extraordinary map collection together with rare artefacts and some stunning examples from twenty-first-century map-makers. Each map is accompanied by a narrative revealing the story behind how it...  END_OF_DOCUMENT_TOKEN_TO_BE_REPLACED
Unusual Histories

By Timothy Brook
Harper | April 28, 2020 | 400 pages
The world-renowned scholar and author of Vermeer's Hat does for China what Mary Beard did for Rome in SPQR: Timothy Brook analyzes the last eight centuries of China's relationship with the world in this magnificent history that brings together accounts from civil servants, horse traders, spiritual...  END_OF_DOCUMENT_TOKEN_TO_BE_REPLACED
Unusual Histories

By Katharine Fletcher
Markham, Ont. : Fitzhenry & Whiteside | March 30, 2020 | 192 pages
"For history buffs, nature lovers, bird watchers, and hiking enthusiasts, Historical Walks continues to be the unique guide to the human and natural history of Gatineau Park. Fully illustrated with maps, archival and contemporary photographs, the book is a one-stop reference and handbook to the...  END_OF_DOCUMENT_TOKEN_TO_BE_REPLACED
Unusual Histories

By Julie Kirkpatrick
Pyxis Press | July 15, 2010 | 248 pages
When Canadian writer and lawyer Julie Kirkpatrick went for a walk in Spain with her teenaged daughter, she intended it to be a holiday in the fresh air, a break from the hectic routine and endless to-do lists of her law practice, and a chance to catch her breath. Thinking that it would help to pass...  END_OF_DOCUMENT_TOKEN_TO_BE_REPLACED
Unusual Histories