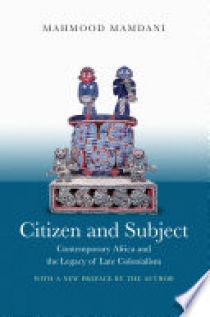 In analyzing the obstacles to democratization in post- independence Africa, Mahmood Mamdani offers a bold, insightful account of colonialism's legacy--a bifurcated power that mediated racial domination through tribally organized local authorities, reproducing racial identity in citizens and ethnic identity in subjects. Many writers have understood colonial rule as either "direct" (French) or "indirect" (British), with a third variant--apartheid--as exceptional. This benign terminology, Mamdani shows, masks the fact that these were actually variants of a despotism. While direct rule denied rights to subjects on racial grounds, indirect rule incorporated them into a "customary" mode of rule, with state-appointed Native Authorities defining custom. By tapping authoritarian possibilities in culture, and by giving culture an authoritarian bent, indirect rule (decentralized despotism) set the pace for Africa; the French followed suit by changing from direct to indirect administration, while apartheid emerged relatively later. Apartheid, Mamdani shows, was actually the generic form of the colonial state in Africa. Through case studies of rural (Uganda) and urban (South Africa) resistance movements, we learn how these institutional features fragment resistance and how states tend to play off reform in one sector against repression in the other. The result is a groundbreaking reassessment of colonial rule in Africa and its enduring aftereffects. Reforming a power that institutionally enforces tension between town and country, and between ethnicities, is the key challenge for anyone interested in democratic reform in Africa.