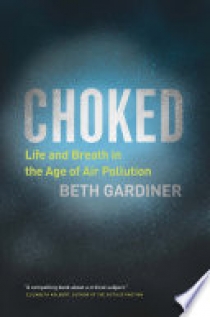 Nothing is as elemental, as essential to human life, as the air we breathe. Yet around the world, in rich countries and poor ones, it is quietly poisoning us. Air pollution prematurely kills seven million people every year, including more than one hundred thousand Americans. It is strongly linked to strokes, heart attacks, many kinds of cancer, dementia, and premature birth, among other ailments. In Choked, Beth Gardiner travels the world to tell the story of this modern-day plague, taking readers from the halls of power in Washington and the diesel-fogged London streets she walks with her daughter to Poland’s coal heartland and India’s gasping capital. In a gripping narrative that’s alive with powerful voices and personalities, she exposes the political decisions and economic forces that have kept so many of us breathing dirty air. This is a moving, up-close look at the human toll, where we meet the scientists who have transformed our understanding of pollution’s effects on the body and the ordinary people fighting for a cleaner future. In the United States, air is far cleaner than it once was. But progress has failed to keep up with the science, which tells us that even today’s lower pollution levels are doing real damage. And as the Trump administration rips up the regulations that have brought us where we are, decades of gains are now at risk. Elsewhere, the problem is far worse, and choking nations like China are scrambling to replicate the achievements of an American agency—the EPA—that until recently was the envy of the world. Clean air feels like a birthright. But it can disappear in a puff of smoke if the rules that protect it are unraveled. At home and around the world, it’s never been more important to understand how progress happened and what dangers might still be in store. Choked shows us that we hold the power to build a cleaner, healthier future: one in which breathing, life’s most basic function, no longer carries a hidden danger.

The Future We Choose

By Christiana Figueres,  Tom Rivett-Carnac
Knopf | March 31, 2020 | 240 pages
In this cautionary but optimistic book, Figueres and Rivett-Carnac--the architects of the 2015 Paris Climate Change Agreement--tackle arguably the most urgent and consequential challenge humankind has ever faced: the world's changing climate and the fate of humanity. In The Future We Choose, the...  END_OF_DOCUMENT_TOKEN_TO_BE_REPLACED
Sustainability

By Daniel B. Poneman
MIT Press | May 28, 2019 | 288 pages
Making the case that we can use nuclear power to combat climate change even as we reduce the risks of nuclear terror. Humanity faces two existential threats: nuclear annihilation and catastrophic climate change. Both have human origins, and both are linked to the use of nuclear energy. Inherent in...  END_OF_DOCUMENT_TOKEN_TO_BE_REPLACED
Sustainability

By K John Grande
January 15, 2019 | 190 pages
"Art, Space, Ecology: Two Views, Twenty Interviews embraces the international context of today's art making and, through the medium of interviews, encourages readers to engage directly with nature-focused creators and their artistic processes. The twenty artists, though diverse in backgrounds and...  END_OF_DOCUMENT_TOKEN_TO_BE_REPLACED
Sustainability

Keeping Bees with a Smile