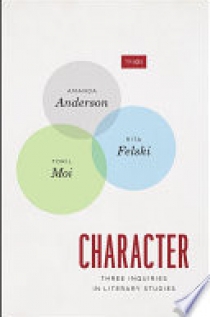 Over the last few decades, character-based criticism has been seen as either naive or obsolete. But now questions of character are attracting renewed interest. Making the case for a broad-based revision of our understanding of character, Character rethinks these questions from the ground up. Is it really necessary to remind literary critics that characters are made up of words? Must we forbid identification with characters? Does character-discussion force critics to embrace humanism and outmoded theories of the subject? Across three chapters, leading scholars Amanda Anderson, Rita Felski, and Toril Moi reimagine and renew literary studies by engaging in a conversation about character. Moi returns to the fundamental theoretical assumptions that convinced literary scholars to stop doing character-criticism, and shows that they cannot hold. Felski turns to the question of identification and draws out its diverse strands, as well as its persistence in academic criticism. Anderson shows that character-criticism illuminates both the moral life of characters, and our understanding of literary form. In offering new perspectives on the question of fictional character, this thought-provoking book makes an important intervention in literary studies.