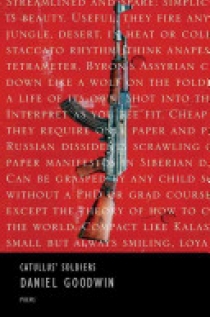 Catullus' Soldiers, Daniel Goodwin's first poetry collection, takes aim at traditional dichotomies: love and war, the personal and the public, high culture and pop culture, the ancient and modern worlds. In accessible but finely crafted poems that are both understated and energetic, the poet moves easily back and forth between seeming antitheses, his field of vision shifting from Roman surgeon Galen reflecting on skills earned in treating the wounds of gladiators, to a contemporary husband and father reluctantly destroying a backyard wasp nest to protect his children. Throughout the collection run three major currents: the poet's love for his family; his ambivalent reactions to the wider world of politics and war; and his private, persistent, sometimes furtive relationship with the Muse as he wrestles with the limitations and triumphs of art in its ambiguous role of mediating between epic and domestic spheres. Conscious of the need to return poetry to its rightful place in our culture and collective consciousness, Goodwin has despatched Catullus' Soldiers to appeal to both confirmed poetry lovers and readers who might not usually pick up a book of verse.