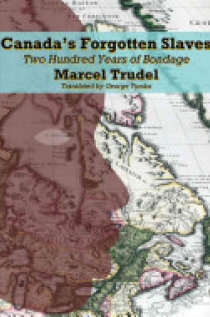 Canada’s Forgotten Slaves is a ground-breaking work by one of French Canada’s leading historians, available for the first time in English. This book reveals that slavery was not just something that happened in the United States. Quite the contrary! Slavery was very much a part of everyday life in colonial Canada under the French regime starting in 1629, and then under the British regime right up to its official abolition throughout the British empire in 1834. By painstakingly combing through unpublished archival records of the seventeenth, eighteenth and nineteenth centuries, Marcel Trudel gives a human face to the over 4,000 Aboriginal and Black slaves bought, sold and exploited in colonial Canada. He reveals the identities of the slave owners, who ranged from governors, seigneurs, and military officers to bishops, priests, nuns, judges, and merchants. Trudel describes the plight of slaves—the joys and sorrows of their daily existence. Trudel also recounts how some slaves struggled to gain their liberty. He documents Canadian politicians, historians and ecclesiastics who deliberately falsified the record, glorifying their own colonial-era heroes, in order to remove any trace of the thousands of Aboriginal and Black slaves held in bondage for two centuries in Canada.