Canada is Not Back 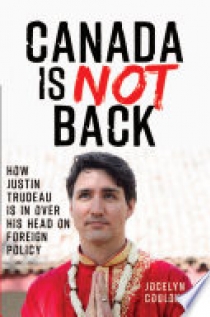 In October 2015, Canadians elected a prime minister who promised to rehabilitate Canada's reputation globally. Justin Trudeau, "the free world's best hope" according to Rolling Stone Magazine, cultivated his image as a staunch advocate for a generous, liberal international order: maintaining peace, helping migrants and refugees, seeking dialogue and enhancing relations with other countries, and reengagement with the UN. Foreign affairs expert Jocelyn Coulon had a front row seat as a key Liberal party advisor during the election and early days of the Trudeau government. Coulon describes the ambitious policy proposals of candidate Trudeau. He analyses some key actions of Trudeau the prime minister. What he sees is more of the same approach that came from the ten years of Harper government. Coulon focuses on the Trudeau campaign to win a UN Security Council seat in 2020 — a campaign he sees as doomed to failure. He describes how an election commitment to re-engage Canadian forces in peacekeeping yielded a carefully-developed plan to send troops to Africa — which Trudeau and his closest advisors killed at the last minute. In other areas, like relations with China, the United States and Russia, looking good in the media triumphs over careful policy making to advance Canadian interests. Readers interested in Justin Trudeau's approach to international affairs will find this a timely, engaging, and revealing book.