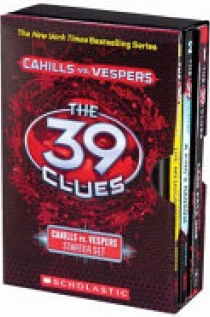 It's never too late to join the hunt! Are you ready to save the world? Find out in Cahills vs. Vespers, an explosive new series in the bestselling 39 Clues franchise. The adventure is just beginning! The Clue hunt is over, but Amy and Dan's adventures have just begun. Cahills across the globe have been kidnapped by a new enemy, the Vespers, and it's up to Amy and Dan to perform a dangerous ransom--a race that will take them from the hidden tunnels of the Roman Coliseum to the ancient city of Timbuktu. If Amy and Dan can't stop the Vespers...the whole world will pay. The 39 Clues: Cahills vs.