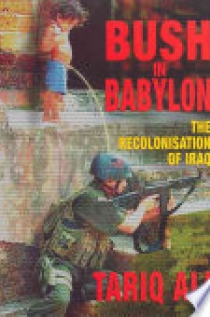 In November 2003, Verso will publish a devastating critique of America's military occupation of Iraq, by one of the leaders of the global antiwar movement, Tariq Ali. Eschewing the liberal option of hand-wringing and the fashionable lurch to the right by some former leftists, Bush in Babylon will stand apart from the morass of sycophantic books now being presented as serious analysis by mainstream publishers. Detailing the longstanding imperial ambitions of key figures in the Bush administration and how war profiteers close to Bush are cashing in, Bush in Babylon is unique in moving beyond the corporate looting by the US military government to offer the reader an expert and in-depth analysis of the extent of resistance to the US occupation in Iraq. The sum is a characteristically revealing blend of politics, history, and culture proposing that the US war on Iraq marks a historical shift in imperial occupation and resistance that will mark the whole of the twenty-first century. On 15 February, eight million people marched on the streets of five continents against a war that had not yet begun. A historically unprecedented number of people rejected official justifications for war that the secular Ba'ath Party of Iraq was connected to al-Qaeda or that "weapons of mass destruction" existed in the region, outside of Israel. More people than ever are convinced that the greatest threat to peace comes from the center of the American empire and its satrapies, with Blair and Sharon as lieutenants to the Commander-in-Chief. Examining how countries from Japan to France eventually rushed to support US aims, as well as the futile UN resistance, Tariq Ali proposes a re-founding of Mark Twain's mammoth American Anti-Imperialist League (which included William James, W.E.B. DuBois, William Dean Howells, and John Dewey) to carry forward the antiwar movement. Meanwhile, as Iraqis show unexpected hostility and independence, rather than gratitude, for "liberation," Ali is unique is uncovering the depth of the resistance now occurring inside occupied Iraq.