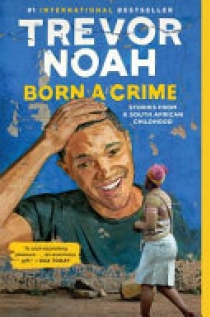 "One of the comedy world's fastest-rising stars tells his wild coming of age story during the twilight of apartheid in South Africa and the tumultuous days of freedom that followed. Noah provides something deeper than traditional memorists: powerfully funny observations about how farcical political and social systems play out in our lives. Trevor Noah is the host of The Daily Show with Trevor Noah, where he gleefully provides America with its nightly dose of serrated satire. He is a light-footed but cutting observer of the relentless absurdities of politics, nationalism and race--and in particular the craziness of his own young life, which he's lived at the intersections of culture and history. In his first book, Noah tells his coming of age story with his larger-than-life mother during the last gasps of apartheid-era South Africa and the turbulent years that followed. Noah was born illegal--the son of a white, Dutch father and a black Xhosa mother, who had to pretend to be his nanny or his father's servant in the brief moments when the family came together. His brilliantly eccentric mother loomed over his life--a comically zealous Christian (they went to church six days a week and three times on Sunday), a savvy hustler who kept food on their table during rough times, and an aggressively involved, if often seriously misguided, parent who set Noah on his bumpy path to stardom. The stories Noah tells are sometimes dark, occasionally bizarre, frequently tender, and always hilarious--whether he's subsisting on caterpillars during months of extreme poverty or making comically pitiful attempts at teenage romance in a color-obsessed world; whether's he's being thrown into jail as the hapless fall guy for a crime he didn't commit or being thrown by his mother from a speeding car driven by murderous gangsters."--