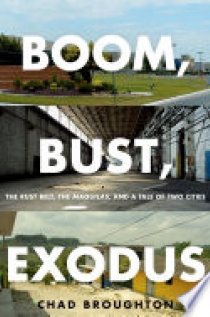 "In 2002, the town of Galesburg, a slowly declining Rustbelt city of 34,000 in western Illinois, learned that it would soon lose its largest factory, a Maytag refrigerator plant that had anchored Galesburg's social and economic life for half a century. Workers at the plant earned $15.14 an hour, had good insurance, and were assured a solid retirement. In 2004, the plant was relocated to Reynosa, Mexico, where workers spent 13-hour days assembling refrigerators for $1.10 an hour. In Boom, Bust, Exodus, Broughton offers a look at the transition to a globalized economy, from the perspective of those who have felt its effects most. In today's highly commoditized world, we are increasingly divorced from the origins of the goods we consume; the human labor required to create our smart phones and hybrid cars is so far removed from the end product we need not even think about it. And yet, Broughton shows, the human cost behind the shifting currents of the global economy remains a reality. Broughton illuminates these complexities through a tale of two cities that have fared very differently in the global contest to woo or retain fickle capital. In Galesburg, the economy is a shadow of what it once was. Reynosa, in contrast, has become one of the exploding 'second-tier cities' of the developing world, thanks to the influx of foreign-owned, export-oriented maquiladoras. And yet even these distinctions cannot be finely drawn: families struggle to get by in Reynosa, and the city is beset by violence and a ruthless drug war. Those left behind in declining of Galesburg, meanwhile, do not see themselves as helpless victims: many have gone back to school, scramble from job to job, and have learned to adapt and even thrive. It is a downsized existence, but a full-sized life nonetheless"--