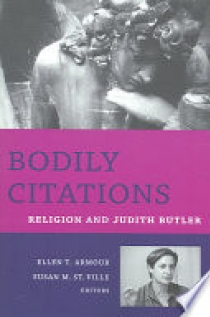 In such works as Gender Trouble and Bodies That Matter, Judith Butler broke new ground in understanding the construction and performance of identities. While Butler's writings have been crucial and often controversial in the development of feminist and queer theory, Bodily Citations is the first book centered on applying her theories to religion. In this collection of essays, scholars in anthropology, biblical studies, theology, ethics, and ritual studies use Butler's work to investigate a variety of timely and controversial topics in biblical, Islamic, Buddhist, and Christian traditions. They discuss the woman's mosque movement in Cairo, religious ritual, the ordination of women in the Catholic Church, the possibility of a queer ethics, and biblical constructions of sexuality. The authors shed new light on Butler's ideas, highlighting their ethical and political import and bringing religious studies into conversation with feminist and queer theory. Including an afterword by Butler in which she responds to the volume's contributors, Bodily Citations is a crucial contribution to the study of religion and a provocative analysis of the work of one of the most important theorists of our time.