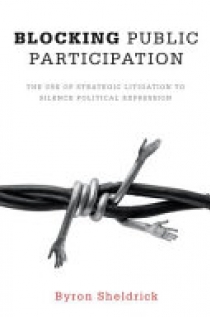 Strategic litigation against public participation (SLAPP) involves lawsuits brought by individuals, corporations, groups, or politicians to curtail political activism and expression. An increasingly large part of the political landscape in Canada, they are often launched against those protesting, boycotting, or participating in some form of political activism. A common feature of SLAPPs is that their intention is rarely to win the case or secure a remedy; rather, the suit is brought to create a chill on political expression. Blocking Public Participation examines the different types of litigation and causes of action that frequently form the basis of SLAPPs, and how these lawsuits transform political disputes into legal cases, thereby blocking political engagement. The resource imbalance between plaintiffs and defendants allows plaintiffs to tie up defendants in complex and costly legal processes. The book also examines the dangers SLAPPs pose to political expression and to the quality and integrity of our democratic political institutions. Finally, the book examines the need to regulate SLAPPs in Canada and assesses various regulatory proposals. In Canada, considerable attention has been paid to the “legalization of politics” and the impact on the Charter in diverting political activism into the judicial arena. SLAPPs, however, are an under-studied element of this process, and in their obstruction of political engagement through recourse to the courts they have profound implications for democratic practice.