By Calvin Lawrence with Miles Howe 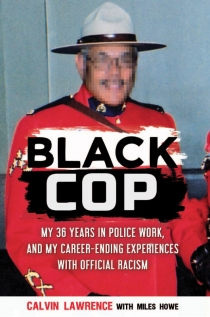 Calvin Lawrence became a cop at age twenty. He was recruited by the Halifax police department at a time of heightened racial tension in the city. From the start, some fellow African Canadians wondered if he had sold out. White citizens wondered whether a black Canadian even belonged in the job. Calvin takes readers into his confidence as he learns to navigate as a beat cop, and how to deal with racism in the community — and worse, in the police force itself. Lawrence leaves Halifax to join the RCMP. He shares his experiences about basic training in Regina, followed by a stint as Newfoundland's only black Mountie. He is pegged for undercover work there, but before long his cover is blown. RCMP stereotyping leads him into Toronto's notorious drug squad as an undercover police officer, and then to years in elite Mountie squads protecting prime ministers and presidents. Throughout his career, Calvin experiences hostility and racism within the force — completely contrary to the officvalues and image of the RCMP. Standing up for his rights gets him blacklisted for advancement, and ultimately leads him to clinical depression arising from workplace hostility and mistreatment. As a seventh-generation Canadian, Calvin Lawrence has written a book which lays bare key failures of Canadian police organizations. Even today they operate on the basis that only white Canadians are entitled to the rights promised to all by the rule of law and the Canadian Charter of Rights.