Black Birds in the Sky 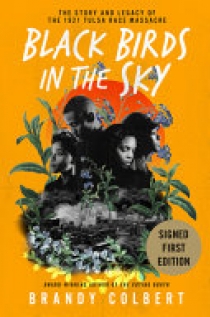 A searing new work of nonfiction from award-winning author Brandy Colbert about the history and legacy of one of the most deadly and destructive acts of racial violence in American history: the Tulsa Race Massacre. In the early morning of June 1, 1921, a white mob marched across the train tracks in Tulsa, Oklahoma, and into its predominantly Black Greenwood District--a thriving, affluent neighborhood known as America's Black Wall Street. They brought with them firearms, gasoline, and explosives. In a few short hours, they'd razed thirty-five square blocks to the ground, leaving hundreds dead.