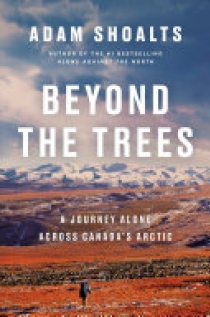 A thrilling odyssey through an unforgiving landscape, from "Canada's Indiana Jones." Why had no one traversed Canada's arctic from west to east before Adam Shoalts, bestselling author and Fellow of the Royal Canadian Geographic Society, set out to be the first in the spring of 2017? Because it was deemed impossible. Between his starting point in Eagle Plains, Yukon Territory, to his destination in Baker Lake, Nunavut, lies a maze of obstacles. Any of them would be daunting to even the most adventurous explorer. Together, they might be suidical. But with trademark doggedness fuelled by his unquenchable love of nature, Shoalts sets out nonetheless. He must time his departure by the breakup of the spring ice, then sprint across 4500 kilometers of inhumanly rugged terrain to arrive before winter closes in. Along the way, he must travel, alone, up the Coppermine river, a route that only the most expert whitewater canoists dare travel even downstream, and then in groups large enough to guarantee safety in the event of an all-too-likely emergency. He must pole for days through the pack of Great Bear lake, portage across fields of jagged rocks that stretch to the horizon, paddle through gales, and navigate labyrinths of swamps and narrow streams, tormented by mosquitoes every step of the way. And the race against the calendar means that he cannot afford the luxuries of rest, or of making a mistake. Every moment counts, and Shoalts must paddle and trek tirelessly, well into the endless Arctic summer nights, not even pausing to eat. But his rewards are beyond reckoning: the crystalline arctic water that allows him to see to the bottom of fathomless pristine lakes, the company of curious wolves loping curiously alongside his route, the astonishing diversity of the arctic ecosystems, from the countless lakes of the swampy wetlands to the dunes of a northern desert. Water so pure he can drink from lakes without filtering, silence so pure he can hear the wind rushing under a bird's wings. Shoalts's only company is the lore of the north, the stories of other adventurers, explorers, First Nations, fur traders, dreamers, eccentrics, and bush pilots who like him are drawn to the arctic. These mysteries and wonders are Shoalts's inspiration as he sets out on his own path through the adventure of a lifetime. Heartstopping, filled with wonder, and beautifully attentive to the majesty of the natural world, Beyond the Trees captures the ache for adventure as only an adventurer can.