Beware of the Giant Brain! 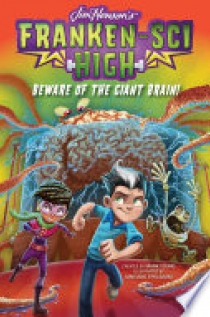 The hijinks continue in the fourth book in Franken-Sci High, the wacky series created with The Jim Henson Company. Franken-Sci High is the only school in the world for aspiring mad scientists and it’s located on a craggy island in the Bermuda Triangle, of course! While some mad scientists are power-hungry maniacs, the school was founded in 1536 as a refuge for generations of brilliant—and sometimes eccentric—young minds. Students are encouraged to use their brainpower for good, but the teachers accept that some kids will want to take over the world…and the school cafeteria. Odifin Pinkwad exists as a brain in a jar, and when he sets his mind to something…watch out! He finds out about a special Franken-Sci High event: A Mad Scientists and Brilliant Brains Trivia Night, and he is determined to win the special prize for first place. His plan to win? Plug into the jars holding famous brains in the school library’s Brain Bank and transfer their knowledge to himself. Odifin thinks he has Trivia Night in the bag, but as he gets greedy for more and more brainpower and figures out how to connect to all the brains at once, he starts to grow, and grow, and grow. Soon he’s a giant brain who exists in a shark tank instead of a jar! He’s smarter than ever, but being a massive brain has some downsides: He needs more and more challenges—like doing the homework of every student in school for fun and making the lights flicker every time someone says “Odifin”—just to keep his brain busy. The strangest thing of all, though, is what happens next…when Newton Warp finds out a surprising detail about Odifin’s past that could change everything! TM & © 2020 The Jim Henson Company