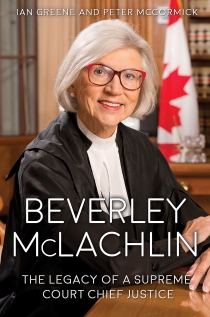 As a judge, Beverley McLachlin has had an unequalled impact on Canadian life. She stands out for her unique ability to stand up for the values and beliefs that reflect the best of Canada and Canadians. As chief justice, she led the way to assisted suicide legislation, far greater recognition of aboriginal rights and title, allowing safe injection sites for drug users and many other changes that have had a dramatic impact on Canadian life. Less well known is her work to modify the way the Supreme Court judges work together to emphasize collegiality and to encourage judges on the court to pay closer attention to real-world information about the issues they are considering. Her courageous action to defend the independence of the court and her own personal integrity when it was attacked by Stephen Harper — an incident discussed and documented fully in this book — underlines her strength of character and integrity. This book sketches Beverley McLachlin's experiences growing up in rural Alberta, attending university, becoming a lawyer and then a judge. At a time when governments were seeking qualified women for senior positions in Canada's courts, she was selected by politicians, both Liberal and Conservative, to fill progressively higher positions. Ian Greene and Peter McCormick focus on her time on the Supreme Court offering readers a balanced, informed perspective on the role she defined for herself, remarkable for her prodigious work and the clarity of her decisions. Their background as leading Canadian writers on the role of the judiciary in Canada allows them to offer an independent and readable appreciation of her contributions to Canadian life.